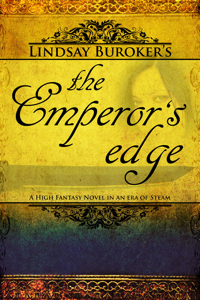 Book Description: “Imperial law enforcer Amaranthe Lokdon is good at her job: she can deter thieves and pacify thugs, if not with a blade, then by toppling an eight-foot pile of coffee canisters onto their heads. But when ravaged bodies show up on the waterfront, an arson covers up human sacrifices, and a powerful business coalition plots to kill the emperor, she feels a tad overwhelmed. Worse, Sicarius, the empire’s most notorious assassin, is in town. He’s tied in with the chaos somehow, but Amaranthe would be a fool to cross his path. Unfortunately, her superiors order her to hunt him down. Either they have an unprecedented belief in her skills… or someone wants her dead.”

My Take: This is one of those books that I had stored away for a time when I didn’t have something else immediately at hand to read. Now I wish I hadn’t waited so long! I hardly know where to start with my love of this book but I promise to try and stay coherent as I gush like a groupie at a Rolling Stones concert.

Amanranthe, the protagonist, is an Enforcer (this world’s version of a cop) who excels at her job, despite grappling with the odious glass-ceiling in her male-dominated profession. When she is thrust into a mission that isn’t what it seems, her world veers off course. She finds herself dealing with danger and intrigue that, despite being unprepared for, she is determined to triumph over. I really enjoyed her dry humor in the face of insurmountable odds and the rag-tag team she assembles from all walks of life.

The country she hails from is ruled by a young Emperor and has an almost Roman Empire flavor to it with its history of conquering neighboring nations. There are muskets, but mostly the weapons are swords, daggers and crossbows. Between the oil lanterns and steam powered cars, with a hint of magic brought in from other civilizations, it truly is a world unlike one I’ve read before.

The Magical: Absolutely, the characters make this a wonderful read! Each one is distinct from the other. I’m not sure how it happened, but my favorite character is the book is the murderous, cold-hearted assassin, Sicarius. Though understated, he carries such a presence in every scene he shares with the others, even when he says nothing (which is often the case), like a predator cat watching from the corner of the room. Yet there are subtle glimpses of the man behind the stony exterior that had me wanting more. The interactions between the witty Amaranthe and him are golden.

The Mundane: I’ll admit the names threw me to start with: Sespian, Amaranthe, Sicarius, Maldynado…Tough ones to get used to, but then again, when the characters are this awesome, who really cares?

Summary of Thoughts: Loved it, beginning to end, and left me hungry for more. This is the first book in a seven book series and is currently free for the Kindle. I will definitely be reading the next book in the series very soon…not that I’m saying I bought it already…or finished it in three days…or downloaded the sample for the third one…I wonder if there’s an Emperor’s Edge Anonymous group in my area…

Curious what others thought? Check out Amazon’s reviews: