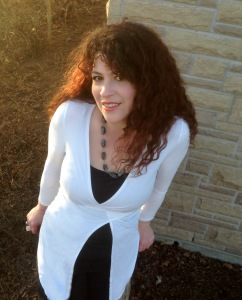 It was my pleasure to interview Jaq C. Reed, author of “The Ungoverned”, a wonderful book that I heartily recommend to everyone. Read the review here

Below are my questions in italics and Jaq’s complete, unaltered answers beneath them.

Tell me a little bit about yourself, for example background, studies, hobbies, day job, etc.

I live an outstandingly ordinary existence. I’m a total animal lover, and my rescued dog has become my best friend. I love rocks and searching for fossils down at the lake and in rivers. I don’t think I’ll ever be too old for that stuff. I don’t dream about vacations to DisneyWorld, I dream of Dark Sky Preserves during a meteor shower, camping out in the Badlands, and seeing how many different oceans I can step my toes into one day.

I do temp work- office work- I think I’m terrible at it- sometimes I wonder why I’m not completely fired. Before children I spent some time teaching ESL to children in Cambodia with a charity. That experience forever changed my amount of gratitude towards what I have in life and has really developed my own questions about our current “Systems”.

Does your writing primarily fall under the dystopian/fantasy genres?

Yes, I love writing Dystopian pieces and other Social Science Fiction. My characters take the lead in the world around them and the stories are about what they do, how  they interact and react to their worlds.  It’s all about the “what if’s” and taking our current world and exaggerating it until it’s only vaguely recognizable.

Has writing always been a passion of yours?

When I was a child yes, as a teenager not so much, I played with it after college, had a few rejection letters and then went on hiatus for awhile.  It’s really came back to me over the last few years, and means a lot more to me now that I feel there are things to say.

How did the idea of your novel “The Ungoverned” come about? Did you start writing it right away or did it develop over time?

I was annoyed at something, and I ranted away to my teenager, and she shot back at me “mom if you care so much do something about it.”  The same words I have always told her.  I took inventory of what I can do, I don’t have much free time to be on the front lines of activism and sharing posts on facebook just seemed so inept.  I knew I could write- or thought I could anyways, and so I began creating a world.  Once I began writing, parts of the story just flowed out, they were living in a pre-constructed world, but their actions were their own. I would chit-chat to the characters and watch them talk to each other in my mind, it’s a little schizophrenic but they did really begin to feel that real to me.

The story line has a compelling environmental angle to it. Was this intentional, and if so, can you expound a bit on what this theme means to you, both personally and as an author?

Personally, it’s always been an underlying theme in my life. I grew up in an area that was  close to nature,  The farmers would work the fields ,the Native Reservations would give thanks to Mother Nature.  There wasn’t a kid in my early classes that didn’t have a garden at home.  There were two occasions in my younger life that has cemented my connection to the earth to how it affects us now and one more recently.

1) There was a moment when I was working in the field with my dad when I was younger and he said something that stuck in my mind to this day.  We never wore sunscreen as children, my father had never worn it in his life, and one day he began to burn.  He looked up into the sky at the sun and said “Something is changing”.  As a child I had the most active imagination, it gave me nightmares for years.

2) There was a Native legend that I remember it had foretold of a time when the earth would give up on itself.  During this time it would be up to the Warriors to rise up and protect the Planet.  If they did not rise the earth as we know it would fall.  If they stood up and presented themselves there would be hope and life.

In my adult life, someone I knew went to work up in an Arctic community in a health clinic.  He told me a story of walking into the waiting room, the people in there looked scared and worried.  He investigated to see what was bothering them, there were flies.  They had never seen flies before, it’s too cold up there.  And yet now in our present age, they are there.

I think about those things at night.

As an author, if I can make the next generation one iota more connected to our natural world, I will feel successful.

Did you have to research any of the environmental science included in the book, for example, the importance of bees to crop cultivation?

I didn’t use a lot of time researching, I looked up how much of our crops were dependent on pollinators, and what could we eat if these lil guys were all dead.  I saw many articles online of how fields of bees were showing up dead, yet it wasn’t garnering much media attention.  I began to be confused when i started researching, because I thought “Hey aren’t these things really important?”  Apparently they are and I don’t know why there hasn’t been more visible press on the matters… I have only conspiracies 😉

What made you decide to go the self-publishing route vs. traditional publishing?

Naivety.  If I had known what I know now when I started on this project I may have not started at all.  But that being said, it has been a wonderful experience, and has brought me out of my hermit shell that I had been living in.  It forced me to talk to people(really I usually just talked to the dog), and begin networking.  I found wonderfully supportive people, from Beta Readers, Editors, Reviewers, I was amazed by the sense of community.  There were a few times where I was actually overwhelmed by the unexpected encouragement.

What lessons have you learned on your path to publication that you think might help those just going through the process?

Set aside time to write, I know we are all short of time, but stock up on some extra coffee and really carve yourself out some time to write each day. I set myself word goals for each day and tried really hard to stick to them. Eventually they will add up to a whole book.  Draw from your life experiences, and make friends with your characters, even the not so nice ones.  Then set your characters free and let them live true to their authentic selves.  And a good editor!  Definitely set aside some money for an Editor.

Can you tell me a bit about what you’re working on now?

I am splitting my time between trying to get “The Ungoverned” some visibility, and spending time working on a new story.

Will there be a sequel to “The Ungoverned”??

I didn’t believe so while I was writing, there were very specific reasons why things happened as they did but right now I am really starting to miss a few of my friends and am leaning towards revisiting them.

Many thanks to Jaq C. Reed for taking the time to be interviewed on Amid the Imaginary!

Hot off the E-presses! Her debut novel, “The Ungoverned”, just released on April 30, 2015 and is currently $2.99 on the Kindle or free for Kindle Unlimited.

In a world of assignment, there is no choice.

To connect with her, check out her Facebook page here

Or check out her author page at jaqreed.com