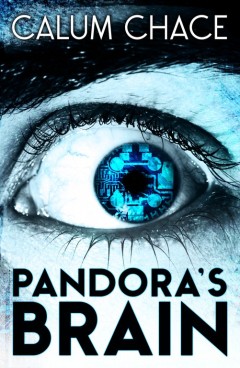 Book Description: “Around half the scientists researching artificial intelligence (AI) think that a conscious AI at or beyond human level will be created by 2050. If they are right, the consequence could be an intelligence explosion, in which the AI rapidly and enormously exceeds human cognitive ability.

Pandora’s Brain is a techno-thriller by best-selling writer Calum Chace. It uses the issues raised by the coming machine intelligence explosion as a platform for a fast-paced and thought-provoking adventure story.

Set in the near future, it features Matt, a shy but engaging and resourceful student who discovers that his recently-deceased father was involved in research that could enable the construction of the world’s first conscious machine.

Matt’s enquiries lead to him being kidnapped, as he is caught in the crossfire between two groups pursuing that goal – one led by an internet billionaire, and another backed by the US military. At stake is his own life and those of his family and friends.

A dramatic seaborne rescue operation, a series of brutal murders and other filmic action scenes follow. In the course of his adventures, Matt discovers that the potential upside of creating machine intelligence includes immortality, and godlike powers of understanding and being – but the potential downside is immediate extinction, or worse. As he is drawn deeper into his adventure, he becomes both the symbol and the victim of a global struggle over the approach to be taken towards this powerful new technology. A landmark decision at a meeting of the UN General Assembly forces Matt to make a fateful decision which sparks the story’s final twist.”

First Line: The warriors tied their canoes to the trees at the edge of the Usumacinta river, and waited.

The premise of this book is definitely a fascinating one. It’s clear the author is informed on the subject matter and integrated a wealth of knowledge gleaned from his expertise in AI technologies in the field today. The trouble I ran into was an apparent lack of craft knowledge to convey this information into compelling fiction.

The first chapter starts with a scene from an ancient Mayan battle. “Huh? Isn’t this about AI?” I thought. Unless one of the guys wielding a club was going to whip out his laptop, I was confused as to how this would tie in to the rest of the story. To be fair, it does tie in but not until the very, very end. As in, the last few pages. Many established authors recommend starting a novel with action related to the actual story, otherwise the confusion causes interest to wane right out of the gate.

The book also had me chewing through a lot of unnecessary information. Every character, whether they were just a walk-on or integral to the plot, was introduced with a complete physical description and  their entire life story unloaded all at once. Newer authors often think this information is crucial, but it’s not. I mean, do we really need to know one of the scientists is 5’7″ and married to a Chinese woman (who we never meet)?

Consider the metaphor of the cocktail party. If someone came up to you at a party and started spouting off their family history, educational background, work experiences and character traits like a curriculum vitae, chances are you’d be backing away from them, and not slowly. The same is true of the reader-character relationship. Let them get to know characters a little at a time through conversation and action.

The story also suffered from a lot of yackitty-yack (um, technical term here). I don’t mind dialogue heavy books when these exchanges reveal things about the characters or hint at events to come or show friendship/animosity between the players. In other words, it has to bring something new to the table. Many of these chapter long conversations went well beyond this point. Worse, they made the tension completely flat line.

Much of this was the author’s attempt to bring the discussion of artificial intelligence to the forefront, including a lot of info on the current state of the technology and its potential. While interesting initially, after a while I started to feel like I’d wandered into the wrong lecture hall but couldn’t find a good moment to sneak out. Uh, not that I’m admitting this happened my first day at University…

The Magical: I really liked learning about the burgeoning AI technology and pondering the question of not just whether we could, but if we even should, dabble in creating a new life form of this kind.

The Mundane: As the book description states, a UN General Assembly decision forces the protagonist, Matt, to make a decision about his fate. One expects a set up for a tense show down, only this doesn’t happen. He makes his decision precipitously and the confrontation never actually happens. If this were a real life scenario, I’d applaud the guy on making the smart move, but since this is fiction, I felt a bit cheated. Anybody see the end of The Soprano’s? Yeah, that kind of build up and then an ending out of nowhere.

Summary of Thoughts: Currently the book is $3.99 for the Kindle. It has great potential but I don’t feel it was ready for publication. It could use a good developmental/substantive editor to cut out the info dumps and tighten the story structure. The book was incredibly informed on cutting edge and future AI technology, which makes for facinating non-fiction. Converting all that into compelling science-fiction requires some research into the craft of writing itself.

Many thanks to author Calum Chace for providing a copy of the book to review.

Want to know more about the author and his work? Explore his website here