When I came to, the students and desks were gone. Mrs. Barry wasn’t staring down her spectacles at me. I wasn’t even in history class.

I was running—yes running—in a group of Scottish Highlanders. Scots covered in mud and blood, yelling, waving medieval weapons over their heads. I couldn’t even think of standing still or I’d be trampled by the stampede of barefooted giants around me.

And so I ran, trying to make sense of the crazy scene.

In my own hand was the hilt I’d just held up in class to show as part of my presentation, a remnant of a long-ago battle my great-great-a-whole-bunch-of-greats grandfather had proudly passed down, claiming brave heroism. Now the gilded hilt didn’t have a broken stub, but a long gleaming blade. As I ran, my knees pumped against a tartan kilt, identical to the ripped, ratted rectangle of fabric I’d brought to show with the hilt.

Then cannons blasted, blowing my eardrums. Men around me flew away, some in bits and pieces. The rest of us kept charging. A row of soldiers slammed into us, our weapons striking and clanging as men fell on both sides.

I swung my blade, nearly petrified with fright, but reacting with instinct. The battle went on and on, men dropping all around me, until only a few Highlanders stood.

The lull in the fighting gave the Scots a moment to retreat to a barn on the rocky hillside. I ran with them. We hunkered inside. They argued.

“All is lost. We must surrender.”

I trembled, wondering what in the world was happening.

Voices shouted outside the barn. “Come or we shall burn you out!”

When we smelled the smoke, the Scots sighed deeply, whispering prayers, and opened the doors. As we surrendered, many were slain. A soldier came at me. I cowered. He snatched away my sword. He raised it to strike, but only sliced off a rectangle from my kilt for a trophy.

The classroom materialized before me again, along with Mrs. Barry, waiting like nothing had happened.

Suddenly I knew. Grandfather hadn’t fought for the Jacobites, but had opposed them. He hadn’t been noble, but a bully.

After my report, I rushed to the cafeteria and found Leroy, a skinny kid with goofy glasses. He saw me coming and threw his sandwich onto the tray for a hasty departure. I waved for him to hold up, then sat across from him. He eyed me warily.

“Hey Leroy. I learned something today.” I reached into my pocket. He flinched. I pulled out ten bucks and tossed it onto his tray.

“I shouldn’t have taken your lunch money. Or bullied you. I’m sorry.”

He hesitated, smiled tentatively, and gave me a fist bump.

My knuckles left wet mud and blood on his as I pulled away my hand.

By Cheri Gillard, author of “The Clone’s Mother” 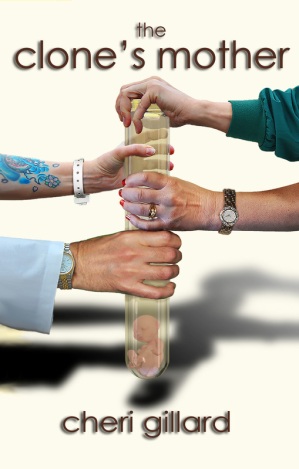 Kate has a date! An actual date, with a real person. Not just a Friday night with her finicky cat or a movie marathon with George Clooney. Mack is more than she could have ever hoped for. But there’s one catch: Mack’s lab partner, Kate’s creepy gynecologist, is up to something. Something dark. Kate finds evidence that the unethical doctor has used his patients as guinea pigs to make a breakthrough in his cloning research. She sleuths around, afraid she’ll scare Mack away if her paranoia is too obvious, but what she discovers might mean Mack isn’t what he says. Is he using her too, like all the men from her past? She won’t risk losing him until she figures out what’s really going on. But time is running out. People start dying. She’d better hurry. Someone knows she’s sorting things out, and that someone is working overtime to keep her quiet. Maybe permanently.

Bio: Cheri Gillard has been a freelance writer and editor for over twenty years, working for several publishing houses and companies writing or editing projects, books, magazines, and curricula. Before writing, she was an obstetric and pediatric registered nurse, but she hung up her nursing cap when she gave birth to quadruplets, who are now in college. She is also a musician, regularly playing violin in a folk-style band and in other venues when she can fit in the gigs between writing jobs. She lives with her family in Colorado. http://www.cherigillard.com/