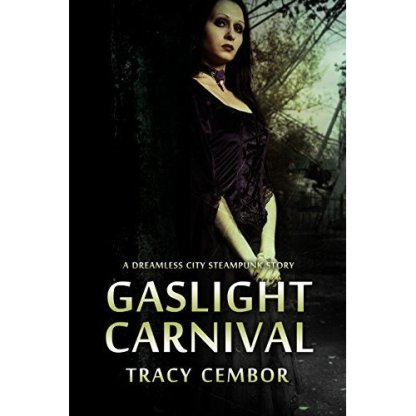 Book Description: “Welcome to the Gaslight Carnival, where fancy and freak walk hand in hand.

Margo Crestley is an alchemist mixing elixirs in the Dreamless City without a license. When the district crime lord threatens blackmail, Margo pins her hopes on someone she has not seen in four years — her twin brother Leonard.

Sold to the traveling Gaslight Carnival by the twins’ father, Leonard is treated like property. Margo scrimps and saves to buy his freedom, but the Ringmaster is unwilling to let him go. The young alchemist can only win her brother back if she participates in the capricious Ringmaster’s cruel games.

A strange young gent with monstrous metal claws, Rook, is helping Margo for reasons she cannot fathom. He seems to know all about her, but she has never seen this augmented man before her first night in the carnival. She must save her brother and has no time for romance, no matter how sweet his kisses are.

Time is running out. The crime lord’s threats are turning violent, and the Gaslight Carnival will soon be gone. The giant glowing balloons and striped carnival tents are set up for three days only before disappearing for another year along with the daredevil stunts, the freak show, and the rigged games of chance. Can Margo save her twin brother in time, or will she be left alone to face the crime lord herself?”

First Line: Margo Crestley pushed up her spectacles and frowned at the elixir claritas she was brewing in Mrs. Pettigrew’s front parlor.

Many of the Steampunk books I’ve read concentrate on dirigible fleets, royalty, and propriety. All great things of the genre, but it was nice to delve into a novel with alchemy as its central Steampunk element.

Margo is a sympathetic character that I liked immediately. Alone since her father’s death, she keeps his business going with the practices he taught her and the grit and determination she taught herself. Squirreling away nearly everything she earns, she holds on to the painful hope of buying her brother’s freedom from the carnival. I liked the way she stood up to the douchey crime lord trying to strong arm her into illegal dealings. During that first confrontation with him, when he caught her unawares on the street, I admired her moxie. It’s not easy to stand up to a bully on your own. Later though, especially after the second run-in, I wondered why she didn’t prepare for inevitable future encounters by, say, getting herself a loaded gun? Why wait around for his goons to show up again?

This unpreparedness became somewhat of a theme with Margo as things progressed. She did have a nice arc, becoming more self-confident instead of placing all her hopes for security and stability on her brother’s return, but this was hard to align with her passivity. By this I mean that she continually went along with the crap the carnival’s Ringmaster made her do, most of which risked her very life. At what point, I wondered, is she going to take notice that this person is going to get her killed, and change tactics? Particularly since the Ringmaster was a proven liar and cheater, why in God’s name would you accede to any demands? Sure, she wants to free her brother, but how likely is that under these circumstances? I kept waiting for her to come up with a new plan but she never did.

The games she had to go through with the Ringmaster were nevertheless fun to read. Margo’s clever ingenuity through her knowledge of alchemy kept me interested and the carnival was a compelling setting for each confrontation.

The Magical: Rich and vivid descriptions of the Carnival had me from the beginning. The freaks and their physical alterations through gears and steel was as unique and fascinating as it was heart wrenching. The secondary cast was well done.

The Mundane: Holes in the story logic kept tugging at my attention. An example: She dealt with the crime lord a couple of times and the implication was that he wouldn’t return because he’d been defeated. Not to go all Tony Soprano here, but crime lords are usually sociopaths who don’t take well to losing, no matter how many times it’s happened. At the end, this part felt like a dangling story thread. It needed more resolution in my opinion.

Summary of Thoughts: Loved the alchemy! The Carnival setting was gripping and well conceived. I wish Margo would’ve been more actively involved in her dealings with the Ringmaster’s shenanigans rather than blithely walking into it. This would’ve done more to make me believe in her character transformation than her internal dialogue. Still, the action was great. I liked this one and its fun use of alchemy in a great genre.

Many thanks to author Tracy Cembor for providing a copy of the book to review!

Want to know about this author and her work? Explore her website here