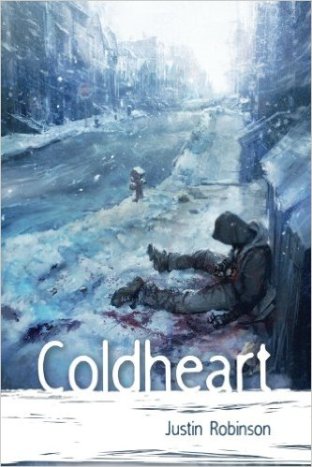 Book Description: “San Francisco is on the edge of a blizzard, the first in a hundred years. A cannibal killer stalks the streets. A rash of abductions targets people seemingly at random. A city falling into chaos.

Chris Black sees the connection. On the trail of a missing woman, he uncovers the delicate threads uniting the disparate mysteries. But he is mentally ill and all of it could be the product of his diseased mind. Balancing the fog of medication with his descent into madness, he struggles to remain lucid in the face of horror.

Delving into a mystery that might be of his own making, he discovers a secret world. A world where women become serpents, the very ground can be his deadliest enemy, a world of the blackest magic. He has found the edges of something older than he can imagine, something that can change the fabric of reality.

And the storm itself is his only ally.”

First Line: San Francisco was as cold as it had been in a hundred years.

The story “Coldheart” itself is a novella, however the book also includes five short stories following its conclusion. This review will concentrate on “Coldheart” but I want to mention how cool it is that the author provides additional stories to lengthen the purchase for the potential reader. These stories are of the same genre (urban paranormal with fantastic elements–Twilight Zone-esque) and are really quite imaginative. I’m a sucker for the short story form though. I love seeing an author get it done in limited space–but, er, I’m getting off topic. Back to the review!

Big win: The main character, Chris Black, is one compelling guy–a helpful feature since this one is told from the first person POV. Struggling with mental illness (it wasn’t called out but based on some hints I’m assuming it was paranoid schizophrenia) he deals with the side effects of medication that make everything foggy, the damage to the personal relationships his un-medicated self caused, and the constant doubt as to whether what he sees is real or just his mind playing tricks on him. This was expertly navigated and I wholeheartedly applaud the author on treating it with sensitivity and avoiding the “crazy” cliche. Mainstream tends to treat the mentally ill as criminal or evil. Those stereotypes were blessedly absent here. Chris definitely had my sympathy, but the writing managed to keep me from pitying him. Excellent.

Now, this isn’t to say that his condition didn’t play a role in the story, especially when the otherworldly starts happening. He can’t help but ask himself if these things he’s witnessed have really happened or not. This is wonderfully juxtaposed with the oncoming storm, the fog that rolls in ahead of the weather making everything difficult to see. A great physical reminder of Chris’s doubts in himself. Awesome tension.

My only complaint is that I had confusion as to the goals behind the antagonists. Without giving anything away, I had trouble understanding the intention behind the things they did. What was their ultimate purpose? Why were they doing what they were doing? And some antagonists were enemies of others, but I didn’t get a clear sense of the history there, only that it existed. I would’ve wished for more of a grasp on this so I could better understand what happened at the end.

The Magical: THE STORM! Living in Minnesota, I appreciate the idea of California getting really socked in by snow and ice. Hm, does that sound bitter? Sorry, but the weather can’t seem to get it together in the Midwest (snow forecasted tomorrow, thrice dammit!), so, yeah, have a taste of it Pacific coast!

I loved the storm and the way it was used to imply a growing menace, risen stakes, and an ever increasing sense of dread as the weather worsened with Chris’s situation.

The Mundane: Throughout all of this, Chris’s main goal is to save Sarah, a woman he’s in love with, when he believes she’s been kidnapped. At first I thought she was his ex-wife, but it turns out she was his brother’s recently ex-wife. Bit of a curve ball there, but this would’ve been fine if I’d some inkling of their relationship before everything hit the fan. Without a few mentions or recollections to ground me in his feelings for her, I had trouble caring about her fate. Since she’s the driving force behind most of what he does, that lack really stuck out.

Summary of Thoughts: This book is currently $2.99 for the Kindle. While I was disappointed with a couple of things in this one, in all it had a great story. Lots of action and tension, some seriously freaky moments, and a main character who is complex and courageous. The five extra short stories at the end were also a nice bonus. Recommended.

Many thanks to author Justin Robinson for providing a copy of the book to review!

Want to learn more about this author and his work? Explore his website here