I had the great pleasure of interviewing award winning author (one of my favorite writers, squee!) Jeffe Kennedy. Having recently read and reviewed the first three books of her awesome new Fantasy series Sorcerous Moons (for the review click here), I was super excited to discuss writing, publishing, and the themes of her work. Below are the questions from the interview and Jeffe’s complete, unaltered answers.

Can you tell us a little about yourself (how you started your writing career, what you love to do in your free time, etc.)?

That would be a lot to answer! The succinct version is that I started out in science and was getting my PhD in neurophysiology when I figured out that I really wanted to be a writer. I got a series of jobs to support that effort – ending up working in environmental consulting for 18 years – up until last year when I finally was able to go to writing full time. I’ve always been a reader, so I make sure to spend time on reading books and stories. I also love to garden. My husband and I are fond of hiking and I’ve recently taken up stand-up paddle boarding.

Do you write in other genres aside from Fantasy?

Some of your books are traditionally published but you also have a self-publishing imprint, Brightlynx Publishing. What has your experience been as a “hybrid” author?

I’m loving being a hybrid author! Much more than I believed I would. I’m blessed to have successful self-publishing friends who have advised me. I’m really very lucky to be able to take advantage of the good aspects of both paths – and to be able to compensate for the flaws in each with the strengths of the other.

In your newest series, Sorcerous Moon, there’s a fascinating division between the women sorcerers who supply magic and the men sorcerers who wield it, with women who are able to do both considered abominations subject to execution. I thought this was a really interesting gender division with regards to power. Can you speak to the inspiration behind it?

You’re the first to ask about that, and there is kind of a story there. I studied kung fu for about 15 years with a school that focused on the Taoist principles that underlay the martial practice. In that view, male energy is yang, which is powerful and active, while female energy is yin, nurturing and receiving. Our (male) teacher extended this to how he thought his students should be. I began to feel oppressed by this attitude. The Taoists see everything as a balance of yin and yang, so I didn’t see why I had to be limited to only yin. The Báran society’s divisions, and Oria’s journey, grew out of that.

I just loved Lonen, the hero in your this series from the Destrye lands. What I enjoyed most is how you confounded the usual “Barbarian” trope. He’s tough but along with the muscle he’s got a clever mind and doesn’t fall into the simplistic Alpha male generic that drives me to madness. Can you talk a little about the qualities you tend to include in the men of your stories? What makes a hero a ‘hero’ for you?

It’s funny, I never thought my heroes had consistent traits until I saw a review referring to “the Kennedy hero.” Basically my heroes always have integrity, a strong moral compass that guides them. They’re confident enough that they don’t need to put their women in inferior roles to puff themselves up. They’re intelligent and compassionate. To me these are all the best heroic qualities.

Full disclosure: I’ve read pretty much everything you’ve written. The heroines of your books are so real. They’re strong but have vulnerabilities as well, including your warriors—something which I love since I’ve found women warriors are often depicted as curvy versions of men. A theme I’ve noticed in their character arcs is this yearning to find their place in the world and in the process of doing this they learn they must discover who they are before that can happen. Am I anywhere near the mark on this? And if I am, does this theme have a personal meaning to you?

Heh. That’s awesome to hear! And yes, a big theme with me is transformation. I’m very interested in the paths we all take to become better people – whether that’s religiously driven, physically, emotionally, what-have-you. I’m a big believer in honest self-scrutiny as a part of that. Because how can we repair our flaws and become better unless we’re willing to face who we truly are? So, yes – you’re spot on target there. J

Who are some of your favorite authors? Any indies?

SO many favorite authors! Since you’re particularly interested in indies, some I love who are self-publishing or going hybrid are Grace Draven, Thea Harrison, Ilona Andrews, Megan Hart, and Molly O’Keeffe, among many others.

If you could go back to when you first started out as an author and give yourself one piece of advice, what would it be?

Be patient. You’re following the path as you should. Things will happen when they’re meant to.

What projects are you currently working on?

I am finishing revisions on a book that’s been difficult to write for some reason. It’s about a damaged former child-star pop princess who has an affair with her driver. Once I’ve put it to bed, I’ll be drafting the fourth Sorcerous Moons book, The Forests of Dru. Then I’m turning to writing a book I’ve called The Body Gift, which is a more epic fantasy about a young warrior woman in a ruthless matriarchal society.

Are there any events coming up where we can meet you?

I go to a fair number of cons. I’ll be at TusCon in Tuscon, AZ, the weekend of November 11-12. I’ll also for sure be at SFWA’s Nebula weekend in Pittsburgh, May 18-21. I may go to others, but haven’t committed. If people would like me to visit a local con or come speak at some other event, just ask!

Thanks so much for taking the time to be interviewed on Amid the Imaginary, Jeffe! 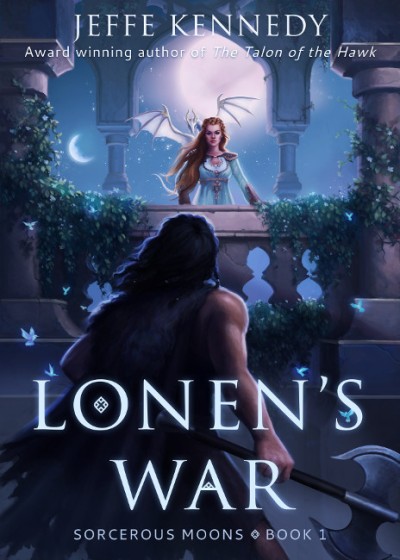 Book One in the adult fantasy romance series, Sorcerous Moons. The novel, Lonen’s War, is a paranormal kindle book of magic and sorcery – and a war culminating in a marriage of convenience between enemy kingdoms.

Alone in her tower, Princess Oria has spent too long studying her people’s barbarian enemies, the Destrye—and neglected the search for calm that will control her magic and release her to society. Her restlessness makes meditation hopeless and her fragility renders human companionship unbearable. Oria is near giving up. Then the Destrye attack, and her people’s lives depend on her handling of their prince…

A Fight Without Hope

When the cornered Destrye decided to strike back, Lonen never thought he’d live through the battle, let alone demand justice as a conqueror. And yet he must keep up his guard against the sorceress who speaks for the city. Oria’s people are devious, her claims of ignorance absurd. The frank honesty her eyes promise could be just one more layer of deception.

Fighting for time and trust, Oria and Lonen have one final sacrifice to choose… before an even greater threat consumes them all.

Get your copy of Amazon today!

Want to know more about the author and her work? Explore her website at JeffeKennedy.com or connect with her on Twitter @JeffeKennedy