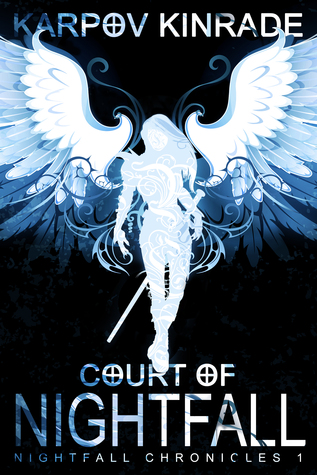 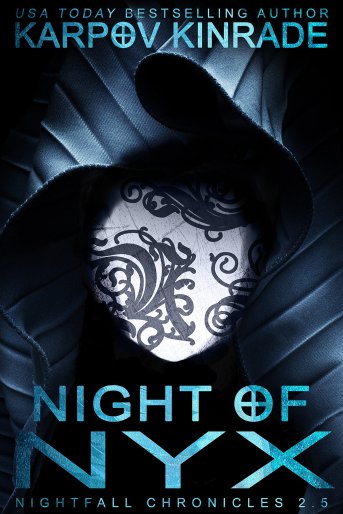 Book Description: From Book One: “You think you know what is right and what is wrong? Then tell me if this man should die. He is my enemy. He is to be my end.

He is the one I love.

I have spent my life in shades of grey. I have died and returned to a world of color. I have fought an Angel and lived. I have kissed the Prince of Ravens. I have faced the Lord of Night and made him kneel. I was accepted into the Four Orders, and I created the fifth. I freed the Shadow of Rome. I sat upon the Twilight Throne.

The man asks for my surrender. He asks for peace. He is too late. The girl he knew is gone, and death is in her place. I am Nightfall, and this is my story. You think you know it?

First Line: (From Book One) Some say my story began when my parents were murdered. It did not.

My Take: It’s clear why this series is such a bestseller. Lots of action, a likable protagonist, awesome worldbuilding, interesting side characters, twisty plot, and of course, the supernatural. Looks like Amazon doesn’t have it categorized as Young Adult but it definitely reads like one, particularly with an eighteen year-old MC and a story told in first-person, present tense. (On a side note, is there a rule somewhere that says all YA needs to be first-person, present tense? Honestly I’m dying for a nice third-person, past tense. Lately when I open a book and see an “I” in the first paragraph it feels like I’m on my tenth consecutive day of eating chicken. Sweet Jesus, I would kill for a nice smoked salmon smothered in third-person pronouns.)

As per the usual for a series reviews, most of this will be related to book one with non-spoiler comments about the series as a whole.

Following a short intro preface, the story starts off with Scarlett Night (nice name btw) as a child. Normally this irks me as I’m impatient to get to the “grown-up” version since I know that’s where the story really gets going, but the early chapters of this childhood were really engaging and important to the plot. This is because the MC has such a compelling voice, but partly too because we get some great worldbuilding revealed and an incident that impacts much of what happens later in her life. Plus, it’s nice when a character has a best friend from childhood (Jax) and you actually get to see some of their time together as kids. That really grounded me in their relationship for later chapters.

In this world, there had been a war between mankind and the nephilim (For those who don’t know, nephilim refers to the offspring of the sons of God who mingled with the daughters of man – half angel folk, in other words). The nephilim were defeated but humans known as Zeniths began to appear. These are people who have powers and are considered the scum of society if they test “positive” for that DNA. This here adds our dystopian element and paves the way for some terrible acts committed by the government against this group.

So, adult Scarlett has been color blind all her life. This is disability that I just haven’t seen in fiction before so I really liked seeing the representation and how the authors worked in description without color. Definitely well done on that point. As you read in the first line, Scarlett finds out there’s a lot more going on that her parents never told you about but she only begins to find out about it when they’re murdered in front of her. She nearly dies herself and then wakes up…”changed”. Turns out the nephilim aren’t as eradicated as we thought.

Now, I feel it my responsibility to point out the following as far as the nephilim because they aren’t what you’d expect. It’s a small spoiler though so continue at your own risk.

As the story went along and I learned more about the nephilim of this world there came a point when I had to stop, close my eyes, and say quietly, “These are not nephilim. They are winged vampires.” Which, I gotta say, I felt a touch misled. Call them winged vampires if you must but not nephilim. Once I reordered my brain I was able to let it go and continue on though. The winged vampires are not like regular vampires so they are distinct, for which I was thankful, but I wonder if some felt misled on that score.

Aside from a couple of minor things, this series definitely grabs your attention and holds on to it. Good, strong, courageous protag facing immense challenges as she tries to juggle two very different versions of herself and her life. Awesome side characters you can’t help but love and be intrigued by. In a word: Riveting.

The Magical: Really enjoyed Scarlet’s personality. She had that nice mix of strength without annoying snark, empathy without being wishy-washy, and self-sacrifice without being a door mat. She’s a girl I really enjoyed reading about, despite the first-person present-tense;)

The Mundane: Over the course of the series we meet three different guys who fall in love with Scarlett and who she has feelings for as well (sometimes not right away but the seed of attraction is hinted at.) Love triangles bug me a bit in any genre but when the men start lining up it just gets to me. Now I will say that when Scarlett is with someone her thoughts are not straying towards the others. She’s loyal and because of this, it wasn’t a problem.

Summary of Thoughts: Books one and two are Scarlett’s story. Book 2.5 is more of a novella with another character and depicts his point of view during the events of book two. As this is one of those super intriguing side characters, I definitely enjoyed hearing his inner thoughts and views of what went on. Book three is actually from another character’s perspective which I haven’t read yet but plan to. All are available exclusively on Amazon (and Kindle Unlimited). I highly recommend these first installments. Imaginative and engaging, they’re full of action and intrigue. You won’t be disappointed.

Want to more about the authors and their work? Explore their website here

2 thoughts on “The Nightfall Chronicles”