With “Guardians of the Galaxy 2” out in theaters right now earning wheelbarrows full of cash for its producers this movie review about a low-budget Sci-Fi film that 99 out of 100 people have likely never heard of might strike you as odd…BUT IT WAS AMAZING! Thus, I feel duty bound to spread the word. 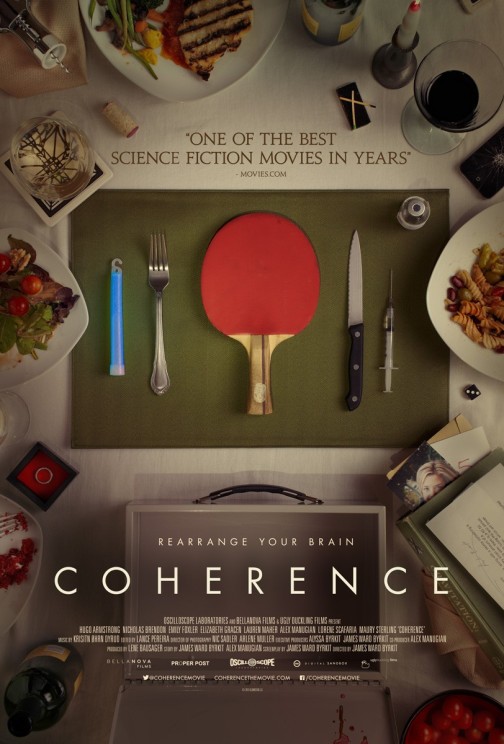 On the night of an astronomical anomaly, eight friends at a dinner party experience a troubling chain of reality bending events. Part cerebral sci-fi and part relationship drama, COHERENCE is a tightly focused, intimately shot film whose tension intensely ratchets up as its numerous complex mysteries unfold.

I’m not sure how I feel about putting the words “tension intensely” next to each other, but intense is definitely an apt description for this film. You’ll recognize its small cast of actors but might not be sure from where. The guy who played “Xander” from Buffy the Vampire Slayer and another woman who was a frequent side character on the TV series “Highlander” are the only ones I really knew. It doesn’t matter though. All of them did a fantastic job.

As the summary said, the movie starts out with a dinner party at a friend’s house. There’s some relationship drama going on as someone thought it would be a great idea to invite over the ex-girlfriend of the main character’s boyfriend. Naturally the ex sashays in fashionably late wearing a slinky red dress. So they get you on the protagonist’s side pretty quickly because, ugh, you just want to smack her and the dopey eyes she makes at the other girl’s boyfriend. Reminds me of this little hussy named Jasmine who had a thing for my husband (then boyfriend) and sat on his lap while I was right there in the room. We were even holding hands at the time. Since this was in Holland I pondered introducing her to the way Americans handle a situation like that. My guy took care of it though, setting her promptly off of him and telling her to get lost. Ah, satisfaction–Um, but let’s get back to the movie review:

The night of the dinner party coincides with a comet passing the Earth. It’s affecting phone signals and internet. Then the lights go out in the entire neighborhood…except for one house two blocks down. They decide to head over there and find out what’s going on/maybe use their phone, but what they find only leads to more questions and an out-of-this-world scenario of mind-bending Sci-Fi awesomeness that keeps your jaw dropping all the way through to the end. Incredibly memorable and amazingly done. Just goes to show that you don’t need millions and millions of dollars to make something spectacular.

Here’s the preview. It doesn’t do the film justice and makes it seem like a big Maury-Povich-style shouting match and semi-horror but that’s not how it was. I think they had to go for that feeling to drive interest because they can’t tell you too much without giving things away. Trust me, this one had a lot of thought put into it. I still plan to see the big Sci-Fi blockbuster but I’m so happy I found this gem.