Things have been pretty ghoulish around the country of late. It’s a surreal thing to see all those torch wielders in Virginia spewing hate, waving the Nazi flag, and making the “Sieg Heil” when probably all of their grandfathers fought against the Nazis in WWII. In some ways I’m glad the old timers aren’t around to see their descendants invoke the name of the world’s once greatest enemy in their protests. (Somebody point them to a copy of “The Man in the High Castle” if they want to see of version of what might have been). I’m positive my own grandpa is pretty pissed off right about now. My husband, who most of you know is from Holland and whose country was occupied by the Germans for five years in WWII, said Americans have no conception of how truly evil the Nazis were.

I’ve been thinking about the nature of hate, the kind that makes someone drive a car into a group of people and call it patriotism. You might wonder what’s the use in trying to understand something that is incomprehensible, but this is what my thoughts came back with:

Hate is another form of despair. It’s the externalization of powerlessness, of unfulfilled need. The trouble is that it has an almost addictive quality. It feels empowering. It gives this sense of vindication, of purpose, when in fact it only takes power away. It makes one more susceptible to another’s control, to be radicalized towards another’s agenda. So I find myself angry all over again that there is such deep despair in this country that it outs itself in the form of hatred and blame and bloodshed. Yet, as much as I strive to understand, I believe with absolute conviction the God-awful things they cried out and the symbols they bandied about during their protests cannot be tolerated and should not (and as a writer, I don’t say this lightly) be protected under the right of free speech. Here’s why:

“Unlimited tolerance must lead to the disappearance of tolerance. If we extend unlimited tolerance even to those who are intolerant, if we are not prepared to defend a tolerant society against the onslaught of the intolerant, then the tolerant will be destroyed, and tolerance with them. In this formulation, I do not imply, for instance, that we should always suppress the utterance of intolerant philosophies; as long as we can counter them by rational argument and keep them in check by public opinion, suppression would certainly be most unwise. But we should claim the right to suppress them if necessary even by force; for it may easily turn out that they are not prepared to meet us on the level of rational argument, but begin by denouncing all argument; they may forbid their followers to listen to rational argument, because it is deceptive, and teach them to answer arguments by the use of their fists or pistols. We should therefore claim, in the name of tolerance, the right not to tolerate the intolerant. We should claim that any movement preaching intolerance places itself outside the law, and we should consider incitement to intolerance and persecution as criminal, in the same way as we should consider incitement to murder, or to kidnapping, or to the revival of the slave trade, as criminal.”

Karl Popper, Jewish philosopher who fled Prussia from Nazis in the 1930s

But it’s not enough to condemn what was said. We have to speak up in return. We have to ask ourselves what can we do.

Recently I came across a message to bloggers from @aartichapati: 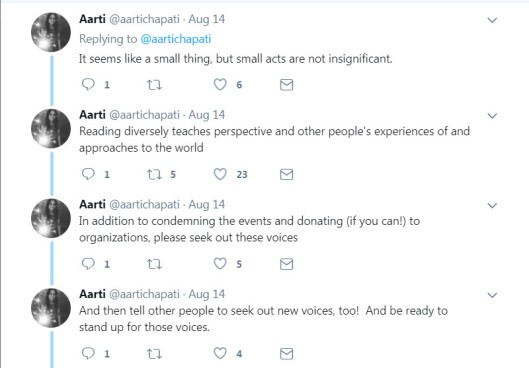 Taking a look through my reviews so far this year, I feel I’m falling way short of the mark when it comes to reading diversely. I plan to do better because she’s right. Learning new perspectives and approaches has always served to elevate my life and my view of the world, usually in ways I never anticipated beforehand.

This doesn’t mean I’ll stop reading and reviewing the authors I love or skip over a story that grabs my interest if it’s written by a white person or has white characters. This is about addition, not subtraction. This is about responding to an ideology that wants to silence and oppress, and fighting against it every way I can. We need more voices, not fewer. I won’t say to love your neighbor no matter what–hell, my neighbors’ kids like to ring my friggin’ doorbell every night and run away (and here I thought that prank had died out)–but wish him no harm and search for ways to understand each other.

“Look at how a single candle can both defy and define the darkness,” Anne Frank said. For myself, and this small space on the internet, I plan to do just that by seeking out new authors and stories. I hope you’ll join me.

5 thoughts on “A Single Candle”