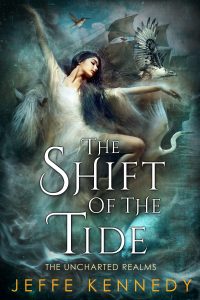 Title & Author: The Shift of the Tide (The Uncharted Realms), Jeffe Kennedy

Book Description: “Free from the hand of a tyrant, the Twelve Kingdoms have thrown all that touch them into chaos. New allies appear–and enemies encroach–from all sides. To survive, they must adapt to this new reality without a moment of doubt…

Growing up in a country where magic was common as dust, Zynda never had to worry about her enchantments upsetting the balance of nature. But the land beyond the borders of the thirteenth kingdom calls to her. It may be foreign and ugly, but the strangeness is laced with an excitement she has never known. Outside her homeland, Zynda’s shapeshifting and sorcery are a potent advantage to nations grasping for dominance–and the thrill of power lures her even as she recognizes the threat she poses to these magic-buffeted realms.

A ruthless enemy stalks them, promising destruction if she does not fight with all her strength–but if she upsets the equilibrium of the land, all will pay, the common people most of all. And a man of this outside world fascinates her, a mossback with no scrap of magic in him. He knows nothing of the fears and temptations pulling at her. But in his steady embrace she learns she must choose well–for the consequences may reach farther than she ever imagined…”

First Line: Water streamed over my skin in a rush, responsive as it enveloped me, like music following my dance.

The Shift of the Tide is the third installment of The Uncharted Realms series, an award winning spin-off from the original Twelve Kingdoms books (Which everyone should read! Start with “The Mark of the Tala” and let me know when you come up for air.)

This story centers around Zynda, a woman from the lands of magic, Anfwyn, who is the strongest shifter of her generation. If you’ve been following this series then you know how we’ve all been dying to find out more about this insular people and culture who rarely, if ever, share their secrets with the outside world (the one without magic). In this book, at last, we get to find out so much about their culture and their ways through the lens of Zynda’s perspective, as well as the epidemic the Tala are facing. Zynda’s self-appointed mission to save her people is one she plays close to the chest, not even telling her friends and allies, knowing the sacrifice it will require is one they wouldn’t let her pay willingly. But this is something she’s worked toward for a long time. There’s nothing else she desires for herself than this–until a near-death experience reveals the devotion of a man she never really noticed before.

Fiercely independent, I really liked Zynda. So closed off in at certain points, I sometimes felt bad for poor Marskal and the way she kept holding him at arm’s length, yet I understood she did this because of her plans, wanting to spare them both from hoping for something that couldn’t be. Lots of tension and agony with these two, but also a mutual admiration and deepening loyalty through their adventures together. You can’t help but hold on to that hope with both hands.

The Magical: Draaaaagons, y’all! Fire, scales, and wings! Loved it! I also seriously enjoyed the way Kennedy wrote the experience of shifting into an animal form, the struggle to hold on to one’s human side while physically inhabiting another skin. Excellently done.

The Mundane: There’s a big enemy the kingdoms are contending with that is using magic to raise dead things–human and animal alike. I know there’s more coming on this front but I wished there’d have been some additional battle/action. I’m betting that’s coming in the next installment but I did feel its absence in this one.

Summary of Thoughts: Currently this book is $6.99 on Amazon. An awesome story, full of self-sacrifice and self-realization. Zynda’s voice carried the book well and her relationship with Marskal took time and felt all the sweeter because of it. I loved Marskal, a warrior without the annoying, flip-her-over-his-shoulder, overbearing trope that makes me want to kill something. Not a push-over either and able to take a few things on the chin. This book is a wonderful addition to the ongoing series and I definitely recommend it!

Many thanks to author Jeffe Kennedy for the chance to review your work!

Want to know more about this author and her work? Explore her website here

1 thought on “The Shift of the Tide (The Uncharted Realms)”