Today I’m excited to have indie author and friend J. K. Ullrich as a guest on the blog! An award-winning Science-Fiction author, she’s recently finished an awesome Sci-Fi series called Syzygy and is here to talk about her experience with the novella story form. Enjoy!

The ESSENCE of Writing Serial Novelle

What do Of Mice and Men, Animal Farm, and The Metamorphosis all have in common? Besides a reliable spot on English class syllabi, each of these classics contains less than 40,000 words, technically a novella. While these famous novelle (that’s the plural, thanks to how the Italian language declines feminine nouns) probably wouldn’t have landed a deal with modern publishers, who rarely consider manuscripts under 70,000 words, readers find a lot to like about the format. Lauded author Ian McEwan praised short fiction that can be read in one sitting, “like enjoying a three hour movie or opera”. If bingeable streaming TV is more your taste, however, consider a novella serial. Earlier this year I completed Syzygy, a science fiction novella hexalogy. Fun yet challenging, the project taught me the ESSENCE of writing a serial novelle: Evaluate the master plot, Structure the component parts, use Suspense, Echoes, and Negative space to Concentrate storytelling, and plan an Endgame for publication.

The Science Fiction and Fantasy Writers of America define a novella as fiction from 17,500 to 39,999 words (70-160 standard pages). That doesn’t leave room for meandering tales that take chapters to hit their stride. Advance planning is essential, especially if you intend to release each novella as you complete it. Plot the master arc just as you would a novel, and don’t skimp on the details. I learned this the hard way when I reached Pt VI: Right Ascension and discovered that my notes, so precise for the early titles, contained little more for the final installment than “Heroes confront antagonist. The end.” That put me in the awkward spot of reverse engineering scenes that fit with everything I’d already established. Having a comprehensive outline from the start would have saved me a lot of agony!

Once you’ve worked out the big picture, subdivide it into individual novelle. If I framed the entire Syzygy story (about 160,000 words) in three-act structure, the first two installments would be Act I (about 40,000 words total) books three through five would be Act II, ending with the peak crisis (about 70,000 words total) and part six is the climactic Act III (about 40,000 words). Each episode builds on the previous one, adding tension and advancing the story.

Component novelle are more than just arbitrary slices of the broader arc: each needs its own internal structure. Let’s zoom in on the plot outline above….

In the scope of the entire Syzygy saga, Transient Phenomena is only half of act one, but as a standalone, it still reflects classic plot mechanics with its own beginning, middle, and end. This helps every piece feel complete. But not too complete. The key to any good series is tempting the audience irresistibly onward.

Notice something different about the Transient Phenomena outline compared to the series outline above? There’s no drop at the end to represent denouement; the action keeps rising. I drew readers through the series by ending each novella with a question or twist that would send them scrambling for the next story right away. Part I leaves Ash’s decision and Skye’s fate unresolved. Part II concludes with a revelation that turns everything upside down. And so on. Identify the suspenseful points in your master plot and divide up the story around them. (I went a step further and tried to end every chapter with a hook as well!) Is it a little cruel to leave readers hanging? Undoubtedly. But is that not an author’s prerogative?

A good hook may pull readers through your series, but it takes more than a core plot line to fuse separate installments into a cohesive, satisfying whole. One way to cultivate connection is to draw parallels between the pieces. Plot and character development accomplish some of this, but I found it was the nuances that really pulled the story together. For example, Ash and Skye’s quips about their respective name meanings in the first book establish an inside joke between them, and variations on it play across the series. Offhand dialogue from early installments, echoed later at a critical point, resonates with new meaning. This technique adds thematic depth and facilitates narrative cohesion. It’s like the baseline in a piece of music, a common rhythm beneath the changing melody. In novelle, even the background is important!

“Negative space” in visual arts describes the sometimes-empty area around the main subject of an image. Narratives have negative space, too, in the ambient details surrounding major events.  Novelle writers can use it as a canvas for implications, making the most of their limited pages. In the opening scene of Transient Phenomena, Skye steals equipment from the Colony and detects a radio signal emanating from Earth. Two simple plot points, right? A lot more appears between the lines:

By integrating all these clues into the background, I avoided exposition and saved precious wordage. (Transient Phenomena is available free for Kindle and Nook if you want to read the whole scene and judge for yourself.) Leveraging negative space helps writers get the most out of every paragraph.

The prologue I just described introduces a protagonist, implies parts of her backstory, establishes key world-building elements, and poses questions that keep readers turning pages…in only 566 words. Concentrated storytelling like this helps maximize impact in the pithy novella format. As you edit, appraise the manuscript with economical eyes. Can you condense any sequences, combine any scenes? Can any characters do double duty? For example, the supporting character Violet is Hazel’s mother and Ash’s father’s work partner and the mechanic responsible for the Colony’s plot-entangled power grid. I could have created a separate person for each of those roles, but combining them makes for a more interesting character (and helps keep the cast from becoming unmanageably large over the course of the series). Once you’ve streamlined the narrative, pare down the prose. My prolix English major habits struggled at first, but I came to appreciate the brisk elegance of novelle.

Your novella may be as fast and trim as a well-engineered spacecraft, but don’t launch it just yet. Publishing a novella serial involves a few more decisions than publishing standalone work. Will you release each installment as you write it? A steady flow of new titles can build a reader base hungry for more, and but you risk continuity errors or writing yourself into a corner if you haven’t planned the story well. What about completing the whole series first? That enables comprehensive revision, but it might take years to complete the entire thing, and having your name off the market that long can be problematic (especially for Indies).

Whichever path you choose, Novelle are a hard sell—people are already reluctant to pay a few dollars for “full-length” novels, much less shorter works—but serials enjoy the advantage of various marketing options.

With swift storytelling honed to its ESSENCE, novella series offer a unique and rewarding experience for authors and readers alike!

Anela says: Many thanks to J. K. Ullrich for an insightful look into the structure and execution of writing a novella series! Check out her website to learn more about her work and find other great articles about speculative fiction and more.

You can grab the first installment of her Syzygy series for FREE on Amazon! It’s a fast-paced story with plenty of twists and awesome characters, so don’t miss out! 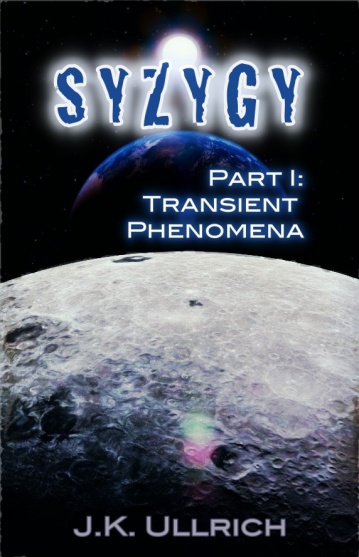 Ash was never supposed to visit Earth. After a genetic engineering catastrophe wiped out civilization, the survivors—inhabitants of a lunar mining colony—planned to rebuild on Mars. That was before a group of rebels seceded to the dark side of the moon, taking critical data with them. Now conscripted teenagers scavenge the ruined planet for species to use in terraforming. At fifteen, Ash is the best diver in a generation. But when tragedy strikes, he vows to end his colony’s dependence on its old homeworld at any cost.

Skye has never set foot on Earth. It’s not even visible from the moon’s far side, although the exiles’ mystic leader promises they will return home someday. Skye has discovered something that could realize this long-awaited dream, but she’s an outcast among outcasts, and no one will listen to her plan. To save her people, she might have to betray them.

Worlds collide when Ash and Skye meet, blurring the boundaries between enemies and allies, deception and truth. Their choices could win a future for humanity…or finally drive it to extinction.

Grab it on Amazon!

1 thought on “Guest Post: The ESSENCE of Writing Serial Novelle”