Today is the release day of the Insurrection Omnibus! (And I’ve already used WAY too many exclamation points for a Sunday morning!)

A little over two years ago I published the first installment of this story with Subversive. It’s hard to describe how I feel to see the completed novella series head out into the world at last. A sense of accomplishment, yes, along with a weird sense of joyful sorrow. The end of one thing is always the beginning of another, but I’ll miss this universe and the people in it.

I’ve decided to leave the omnibus on sale today through May 6th. Grab your copy on Amazon for only 99¢ Also available on Kindle Unlimited. 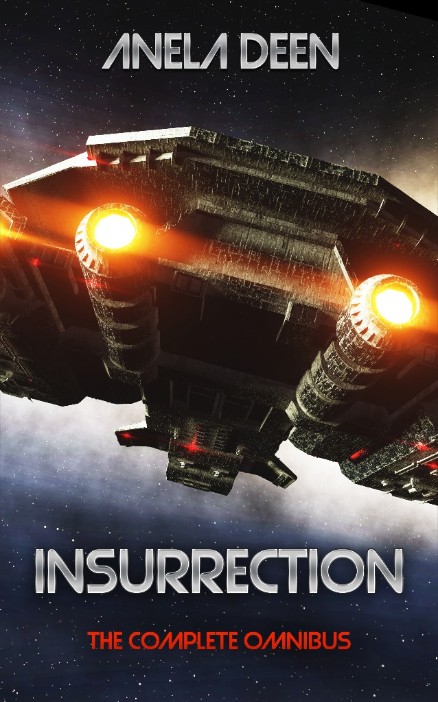 For twenty years Inquisitor Gemson Agaton used torture and interrogation to root out subversives undermining the Establishment. He earned his cold, hard reputation, setting morality aside in the name of a strong state. Now he’s on the subject’s side of the interrogation table, duty to the regime he believes in pitted against loyalty to the one person he always protected.

Gemson isn’t the only target on the Establishment’s radar. An insurgency challenges its authority. Every attempt to capture the Albatross, the rebels’ enigmatic leader, has failed. To the oppressed, he epitomizes freedom from tyranny. But behind the symbol is a man haunted by his past. Not even his closest allies know his true identity, and he’s careful to keep it that way.

As the Albatross rallies Earth’s citizens to resist the regime’s dictatorial rule, many are listening, including one of the Establishment’s most talented operatives. To find and betray him is her directive. To fall in love with him is treason.

In this universe, there are no easy answers and secrets cloud the truth. When a new threat emerges, these unlikely few must overcome their discordant history and forge alliances among enemies. The survival of mankind depends on it.

At over 100k words, the Insurrection omnibus brings all five books from the novella series together. An action-packed space adventure, it’s a tale of redemption and sacrifice in the struggle for humanity’s ultimate fate.